Congratulations to our UNISON colleagues at The School of Oriental and African Studies (SOAS) in London, who have averted the threat of compulsory redundancies through collective action.

Staff members at SOAS were threatened with up to 88 compulsory redundancies, as part of the school’s Transformation and Change restructuring project.

The SOAS Unison branch balloted its members on taking industrial action. 74% of members voted for industrial action, with a 71% turnout. Strike action was scheduled for the 22nd and 23rd of September, with both virtual and physical pickets planned.

At our branch officers meeting on 16th September, a motion was passed to donate £200 to the SOAS branch’s strike fund, and for a message of support to be sent from our branch.

The planned strike action was called off on 18th September, when a new agreement was made between SOAS and the branch. In the new agreement, members facing redundancy will now be provided with an extended redeployment period, and will receive individualised support and development training to help them find alternative roles within SOAS. 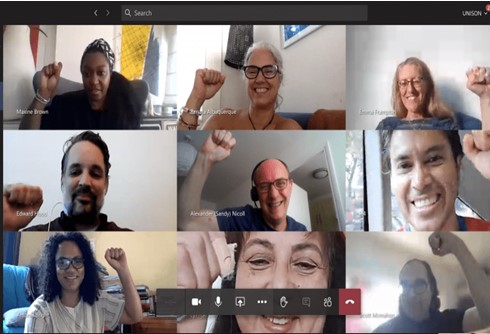 Once again, congratulations to the SOAS branch for their victorious action. They have shown the power of a united and organised branch, using direct and timely action when required.