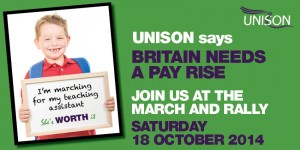 Britain Needs a Pay Rise march and rally on 18 October

The TUC event begins with a march through central London, culminating in a rally in Hyde Park. There will also be demonstrations in Glasgow, and in Northern Ireland.

This is your chance to join hundreds of thousands of others in standing up for fair pay this autumn. Falling wages affect everyone, so members will be bringing their families and friends along too.

PCS is likely to have a small number of  spare train tickets  from Sheffield and Leeds to London for the Demo on 18th October.

If members would like to buy them, they will be selling them for £20 each (return) which is equivalent to the cost of coach travel.

UCU are running coaches to London on 18 October as follows: