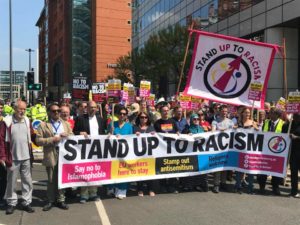 We are seeing the biggest rise in support for fascism, the far right, racism, Islamophobia and Antisemitism since the 1930s.

Hate crime has spiked to unprecedented levels. Whilst fascists and racists are mobilising on a scale not seen for decades, the far-right movements are gaining power across the globe.

The election of Jair Bolsonaro marks an extremely serious point in the rise of the global far right. It came a day after the shocking antisemitic attack on the Tree of Life Synagogue, Pittsburgh, in which 11 people were killed.

The majority of society opposes fascism and racism, but we can only defeat it if we come together and take action.

The 17th November is our chance to show that in our thousands and millions we are proud of our diversity, and we stand united in our determination to drive back this toxic wave of hate.

The demonstration is initiated by Stand Up To Racism, co-sponsored by Unite Against Fascism and Love Music Hate Racism, officially backed by the TUC and Unite, whilst also supported by Diane Abbott MP, John McDonnell MP amongst others.

Our Branch has agreed to pay the cost for 5 tickets for members who wish to attend the demo – this is on a first come first served basis.