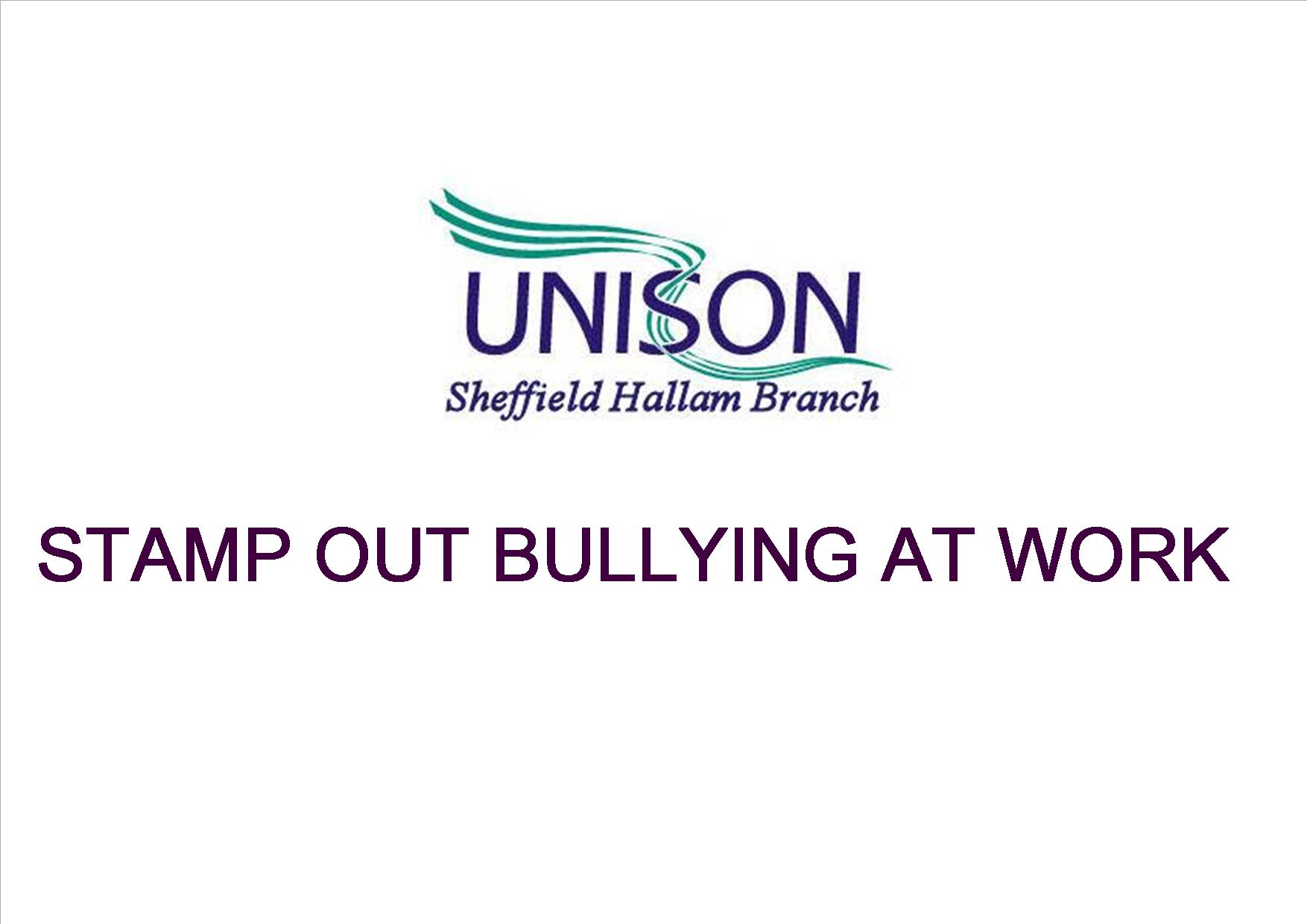 Last year’s staff engagement survey revealed that an alarming number of staff (26%) had experienced or observed bullying or harassment.   While most staff said they knew what support mechanisms existed, a significant minority (23%) did not.

A working group was set up to develop actions in response to this, and we hope to see concrete actions arising from that. But following discussion at Branch Committee, we thought it was useful to provide more information to help members understand and address the problem.

The University’s “Dignity at Work Policy”, developed in consultation with UNISON and the other recognised unions, can be found here: https://sheffieldhallam.sharepoint.com/sites/3005/polproc/dignity/SitePages/home.aspx.

“Harassment” is defined as “any form of unwanted conduct [that] occurs with the purpose or effect of violating the dignity of a person and of creating an intimidating, hostile, degrading, humiliating or offensive environment.”

“Victimisation” is “where a person or group receives less favourable treatment than others because they have referred to or asserted their rights under anti-discriminatory legislation and/or university policies.”

And bullying is “persistent, unwelcome, offensive and intimidating behaviour or misuse of power, which makes the recipient feel upset, threatened, humiliated or vulnerable and undermines their self-confidence.”

The focus of this article is bullying.

Bullying does not have to be physical, it could take the form of spoken or written conduct, or non-verbal behaviours.   It could include ‘jokes’ or practical jokes, being shouted at, ridiculed, demeaned, undermined, or subjected to sarcasm or derogatory or inappropriate remarks. Threatening behaviour can be bullying whether physical or psychological, as can overbearing or intimidatory management or supervisory behaviours.  However, it is also possible for a manager to be bullied by someone they manage.  Bullying can also take the form of systematically withholding information, excluding people from meetings or communications without good reason, the “silent treatment”, or abuse of power.

If the bullying is related to a protected characteristic such as gender reassignment, disability, age, sex, sexual orientation, pregnancy or maternity status, marriage or civil partnership status, race, religion or belief it may be covered by the provisions of the Equality Act, which provides specific protections against harassment.

Of course, some behaviours may be unacceptable without constituting bullying. The Dignity at Work policy includes further examples.

We often speak to members who feel unsure whether the behaviours they have experienced are “OK” or not, and it can be reassuring and empowering to know that what has been happening is bullying and that it is definitely not “OK”.   Speak to a Union representative if you have any concerns or want advice about your situation or are unsure what to do.

It is important to be clear that all employees have the right to work in a safe environment, and the University is responsible for (and the Policy makes it clear that they are formally committed to this) creating a workplace that is free of harassment, victimisation, discrimination and bullying, and where everyone is treated with dignity and respect.

The Dignity at Work policy states that “The University has a zero tolerance approach across all protected characteristics as outlined above to Bullying, harassment and victimisation which are all disciplinary offences and will be dealt with under the University’s disciplinary policy. Bullying  and  Harassment can constitute gross misconduct and can lead to dismissal without  notice.”

The Policy states that allegations of bullying will be investigated.

What can I do about bullying?

There are several steps that any individual who believes they are being bullied should take.

The University’s policy is that bullying allegations are taken seriously and will be investigated.   If the investigation upholds the complaint, then disciplinary action can be taken.

It is recognised that it is not easy to raise complaints about bullying, so do seek support from UNISON.

Can I complain anonymously?

Isn’t it just one person’s word against another?

The purpose of an investigation is to come to a conclusion on the balance of probabilities rather than trying to find indisputable proof, which of course may not exist.   Notes taken at the time an incident occurred are important evidence, as is evidence that you have discussed the matter with HR, a line manager, or a Union representative or colleague.  Emails, text messages and social media posts may exist, as may meeting notes (or the lack of them).  There may have been witnesses to some of the behaviour complained of, if not all of it   And a person accused of bullying will not necessarily point-blank deny the behaviour, but may seek to justify or explain it away.

If an investigation is unable to uphold a grievance, due to contradictory or lack of evidence, action to deal with conflict between individuals may still be appropriate.

Bullying is unacceptable, but the staff survey suggests it is common but under-reported.  UNISON representatives are keen to support members in fighting bullying wherever it occurs and whoever is doing it.   Please get in touch if this is happening to you.